Hello Esther, and anyone else who reads this.

Good news from the plot. Food production is going well, but there's no chance of us getting fat yet.
The potatoes recovered well for their earlier frost related problems, and are now flourishing. Lettuce and salad leaves are going to be ready to harvest soon. Onions are doing well, and the bigger of the two rhubarb has produced another crop (ready for pie tomorrow- yum!) The carrots in the ECB are doing well too. I have got high hopes for them.
Beetroots are still very small, but most survived transplanting. I have sowed the seeds for a whole forest of sweetcorn, but so far nothing has appeared, but it's early days yet. I still haven't dug over the ground where I am going to plant them, so there is no rush there.
The big success of the spring has been radishes. I know radishes are so easy to grow that you give them to kids to get them started, but that doesn't make it any less exciting when I can pop up to the plot to water and come back with a fistful of veg. This year I planted red and purple ones (Amethyst). They have both performed well. The reds look great, and have a good crunch, but the purple ones are nice and peppery. 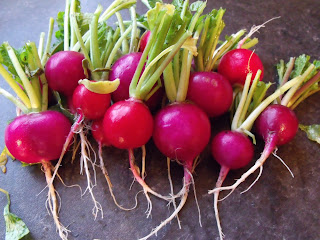 Welcome to Leon, my first follower. It seems a bit weird having a follower. I generally write this blog to amuse myself, and didn' t know anyone else read it, except for my dad, when I remind him. Anyway, cheers for joining up Leon, and perhaps I can inspire you to get your own allotment!
Posted by Rob Bresnen at 15:58 No comments:

Things had been going slowly down at the allotment, as I have been busy with so many other things. Just listing them would stress me out, but you know- life and stuff. I have been struggling to find the time just to do basic maintenance, like weeding and watering. I had a further blow to my confidence last week when I found all the tips of my potatoes plants crinkled and black. I spoke to one of the old timers, who confirmed my fears- it was frost. In mid May- I ask you. Apparently it is considered unwise to leave potatoes uncovered before the end of May, which is news to me.
Luckily, the potatoes seemed to have recovered, and with the fine weather we have been having I have managed to commit more time to the plot, and even drag Corinne and the kids down there for a bit of extra help. now things are shaping up well.
This week we have weeded the beds, constructed another raised bed (it still needs digging over), planted out salad vegetables, sowed more radishes, transplanted beetroot seedlings, put straw beneath the strawberries and generally spruced the place up a bit.
We have also eaten the first fruits of our labours to, in the form of some radishes and rhubarb (not at the same time). I planted two varieties of radishes, one a nice shinny red, your classic salad radish, and the other small and deep purple coloured. The purple one has a more intense, peppery flavour, which is my favorite. More of those got eaten at the allotment than made it home to the salad bowl. Well you have got to try these things.
When I first planted the radishes, I did them in two neat rows, one purple, one red, interspaced between the onions. Now Eleanor has emptied both packs of radishes into the carrier bag the seed packets were in, so they are all mixed up together- now I wont know which one I am pulling until it's out of the ground. Ho hum.
The rhubarb we had in a pie, with some apple- very simple, but very tasty. Charlie doesn't eat cooked fruit (I think he is afraid it might be good for him) but Eleanor tooked in, with great gusto.
Charlie seems to have gone off the allotment at the moment- I think he sees it all as a bit of a waste of time, which is sad and disappointing. remember that this is the boy who said, rather pointedly, that "this is our allotment, daddy, and not just yours!". Today however, after some persuasion (some might read that as 'moral blackmail') he was more helpful, helping me build the bed and putting straw down for the strawberries. hopefully he new found enthusiasm might last a bit longer than the weekend.
Posted by Rob Bresnen at 15:30 No comments: 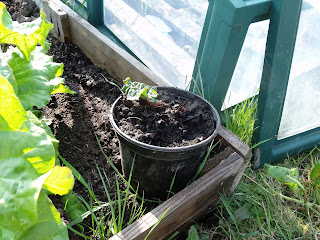 Good news of the Rhubarb front. The rhubarb plant I thought had died has just shot out a single, tentative red stem. When I dud it up I had noticed that there was some early signs of life, although nothing to compare to the other robust specimen. Thinking that it was worth giving it a shot, I spared it from the compost bin and roughly shoved it into a pot of muddy soil. It rewarded me for my effort, although it has a long way to go to catch up to it's big brother! 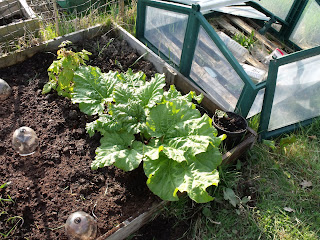 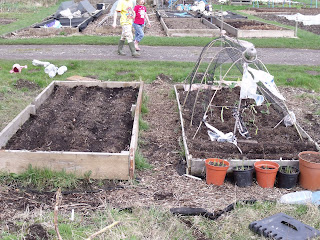 I continue to make progress in this lovely warm weather we are currently enjoying- the ground is beginning to dry out a little, and so I have managed to doe some more planting. The two central raised beds are in the best condition. I added the bulk of last years compost bin to these two beds, and dug them over. I planted one with potatoes- Charlotte and Maris Piper. The other contained strawberries that I planted last year. A few of these had died so I replaced them and added some protection in the form of clonches made from pop bottles. Hopefully that will help them catch up. I also had a bit of room left over so I planted up a few first early potatoes- I forget which type. 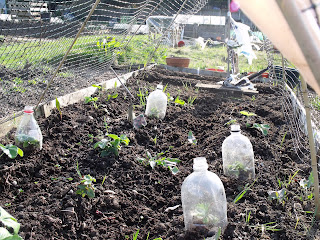 Corinne helped me dig over one of the beds at the wetter end of the allotment- the ground was still sticky and heavy, and so I added a lot more soil and compost to try to raise the surface up and dry it out. I planted onions in this bed. Normally onions don't like a wet spot, but I am hopeful that they will enjoy that location as it is now high and dry. 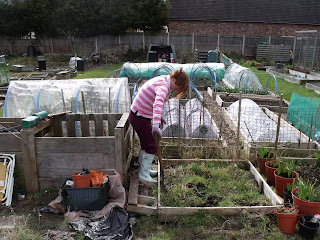 Charlie and Eleanor came down to 'help', which seemed to consist of jumping in muddy puddles and playing in the car. Not actually that helpful. 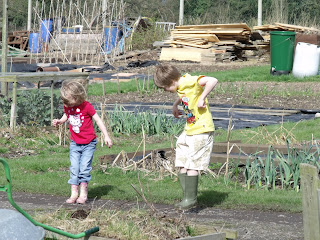 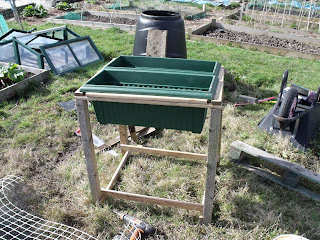 I have finally completed the Experimental Carrot Bed (E.C.B). This is something I blogged about a while ago, and is the natural evolution from my Bucket-of-Carrots experiment last year. The principle is simple- Build a wooden frame to support two deep containers. The legs of the stand must be 2 1/2 foot high. Fill the bottom of the containers with a layer of grit, for drainage, then fill the rest of the container with a mixture of soil and compost. Add a net to keep off the pigeons, sow in some carrot seeds - Autumn Gold, which worked well last year.
The rational for this is that Carrot Fly, the principle pest for carrots, hovers at no higher than two foot, and so will be unable to attack the carrots, as they are above this height. It should also be an effective deterrent to mice and slugs- I hope. It has the added advantage of being a good height to work without bending down. I sieved the soil to remove any roots and small stones- even small stones can deflect a carrot root. leading to misshapen veg.
I covered the container with plastic sheeting to act as a mini-poly tunnel to increase germination, to gain another head start. 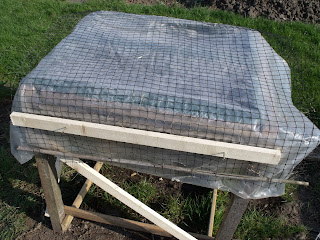 As this is an experiment, I also planted a control (ie, a line of carrot seeds in the soil, not enjoying ant of the protection and advantages of the ECB. If the ECB proves a success I will make a much larger one next year. If not, well there's no harm done, as I made it entirely out of recycled and reclaimed materials.
Posted by Rob Bresnen at 13:44 No comments:

Well it's April already and I have broken my new years resolution to post on my blog every month. In my defence the weather in February was so bad that it put me off, and March has flown by in a whirl of rainy days, over time, weddings and other distractions. But now April is here I am once again reaffirming my vows to post at least on a monthly basis.

I went down my allotment today. It is Easter bank holiday weekend, and I expected it to be very busy, but I was the only one there. I think the forecast of a wet rainy day must have put some people off, even though it was very pleasant this morning (in between the April showers), and perhaps some people were away. I too the chance to take stock and have a good look around at what was growing, and importantly, what wasn't.

I managed to harvest some leeks and spring onions. The leeks, I have to say, have been a bit of a disappointment- and it is quite hard to tell them apart from the spring onions. The bed the leeks were in is very wet and boggy- so presumably that had something to do with it. I have considered turning it into a paddy field and growing wild rice, but I think it might be more practical to build it up into a raised bed. The garlic I planted at the end of last year is sprouting, and one of the Rhubarbs is doing amazingly well (the other has died- I won't be buying any more of that type). Some of the strawberries have survived the winter, but are not really thriving. A few were not so lucky, and I have some gaps in my strawberry bed. Likewise the raspberry bed is filled with nothing but dead canes. The whole bed will have to be dug out, more soil added to improve drainage, then put over to some other purpose.
My plan for April is to plant the potatoes- I have been chitting them on my study window sill. This year I am planting a lot more than last year, with the hope of a much higher yield. I have also decided to stick to well known varieties we like, so I have gone for Maris Piper and Charlotte, as well as a variety of early cropping new potatoes too, just to get us in the mood. I will be planting more strawberries to replace those that died during the winter. I have a new raspberry cane from ALDI that will go where the dead rhubarb plant was. I also have carrots, radishes (two types- purple and red), yellow courgettes and red and white onion sets.

I want to build at least three more raided beds, and my carrot bed, and press on with digging out the paths. I think that I might have to compromise my morals and buy the timber I need to build the raised beds I as I have just not been able to get my hands on exactly the right type of wood for the job. I also need to transfer my compost from one container into the other to help speed up its composting proses. I think I might be busy in April.
Posted by Rob Bresnen at 12:29 No comments: